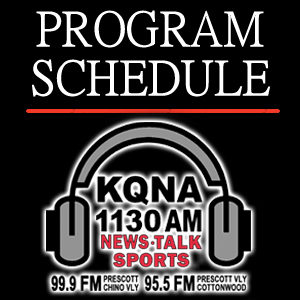 Hard to believe that it’s been 25 years since Mike Austin and I talked about doing a sports talk show on KQNA.  I first met Mike in 1987 when he called us wanting to advertise one of his legendary baseball card shows at the Hassayampa Inn.  Even though he was from Chicago and I was from Detroit, it was obvious that we shared a love for the history of baseball and thus when Terry and I acquired what became KQNA 1130 AM “News-Talk-Sports” it was just a matter of time before Mike and I turned our love of sports into a twice-weekly live sports talk show, debuting in July, 1994.

That didn’t last long!  We are two busy, busy people and doing a Monday AND Friday show was just too much of a commitment.  After a short time, we decided that talking about the upcoming weekend was more interesting than reflecting on the weekend just past.  So, Let’s Talk Sports became a 4pm Friday afternoon fixture and continues to this day as a labor of love.  We may act like reporters, but we are really all BIG FANS! Shhhh. Don’t tell the ballclubs.

One of the things we decided early on was to abandon the typical 15-20 second sound bite in favor of the 3 to 5 to 20 minute interview with players, coaches and sports reporters.  To us, this was a lot more interesting and a chance to get to know what some of this folks are really like. We also decided not to take calls from the public. We wanted to hear more from the players and so did the audience.  It’s a formula that has served us well for now 25 years.

Ironically, it was Let’s Talk Sports that led to the landing of the Arizona Cardinals broadcasts.  John Shean, Cardinals Director of Broadcasting was coming home to Phoenix from San Diego one Friday afternoon in 1994 and happened to have his radio on 1130AM because it was the San Diego station he used to work at.  Sure enough, when he started getting closer to West Phoenix, his radio picks up these two guys talking sports from Prescott. John called me on Monday and asked if we were interested in carrying the Cardinals games. That took about two seconds to decide.  YES! Celebrating our 25th season with the Cardinals!

In 1997, we added the Phoenix (now Arizona) Coyotes which also proved fortunate because when Joe Garigiola, Jr. who had been interviewed on our stations many times leading up to the inaugural season of Arizona Diamondbacks Baseball went to choose an affiliate for the Prescott area, we had two other sports franchises and a live weekly talk show that made choosing KQNA easy for the DBacks.

Our next big move was to bring on the Doc, Dr. Ron Corak as reporter and co-host.  Ron had recently retired from a long career as a dentist and shared our love of everything sports.  His coming aboard made our broadcasts complete and gave Mike and I time to accommodate our busy schedules.

The highlight for all three of us had to be when the Arizona Diamondbacks won the 2001 World Series  at Bank One Ballpark. We joined the team on the field in celebration and continued the live broadcast after the network coverage had ended with an on the field live interview with outfielder David Dellucci.

There are so many other great moments, many of which we will re-live with you all during July, 2019 as we celebrate 25 years talking sports on KQNA.  It has been both an honor and a privilege to live the dream of being professional sports talk show hosts. For Mike and the Doc as well as the many, many backups, Bill Monroe, Mike Pantalione, DJ Fone, Swami Steve and more, HAVE A GREAT SPORTS WEEKEND EVERYBODY!

John Hagensen exposes industry myths for truth seekers who are fed up with outdated financial advice. Once a broker, now a fiduciary, John sets out to reaffirm what you know to be true and to challenge the advice you may have been told is true. John and his Creative Planning team manage over a quarter billion dollars for those nearing and into retirement, and each week he offers unique insights by sharing his vast experience with you. Tune in to “Rethink Your Money presented by Creative Planning” on 1130am KQNA

THE BEST of DENNIS PRAGER

THE BEST of MARK LEVIN

THE BEST of DENNIS PRAGER

THE BEST of MARK LEVIN